Reports are out claiming that Arsenal are battling Liverpool and Tottenham for Schalke whizkid Leroy Sane. 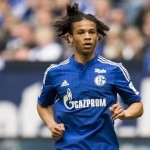 The Daily Star Sunday reported that Arsenal sent a scouting delegation to watch the Schalke 04 winger in action against Sparta Prague in their Europa League clash at Gelsenkirchen on Thursday night.

The Gunners’ spies were highly impressed with Sane who has now scored seven goals in nine games for club and country with a full call up to the German squad just around the corner.

Sane has agreed a five year deal with Schalke but that won’t deter Wenger in Arsenal’s quest to succeed where Liverpool and Tottenham have failed.

Former Kop boss Brendan Rodgers was committed to meeting Schalke’s £11 million asking price but Sane turned down the chance to play in the Premier League.

Tottenham also had a cut price £8.5 million bid rejected, too, but Arsenal will press ahead with a move with the German club expecting Wenger to close in on Sane.