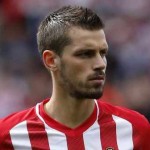 Reports are out suggesting that Arsenal are on the verge of making a massive offer for Morgan Schneiderlin.

The Standard is of the belief that the Gunners are determined to get the Southampton midfielder after showing plenty of interest in him in ever since the summer transfer window.

Liverpool and Tottenham are also showing considerable interest in the 25-year old Frenchman but it has come to light that Arsene Wenger may make a lucrative offer in January in a bid to secure him at the end of the season after Schneiderlin said he would not depart St Mary’s in the middle of the campaign.

The former Strasbourg man, who has starred for Ronald Koeman this term, is contracted with the Saints until the summer of 2017.