Reports are out claiming that Real Madrid midfielder Lucas Silva is interesting Arsenal. 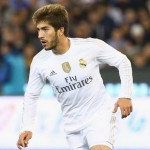 AS reported that the Gunners are keen to tie up a deal for the holding midfielder.

They were chasing Silva before he ended up in Madrid in January.

However, Arsene Wenger is likely to face competition from Premier League rivals Manchester United and Chelsea for his services.