Reports are out claiming that Arsenal are ahead of Manchester United in the race for Freiburg midfielder Matthias Ginter. 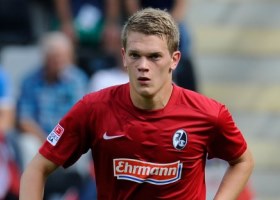 It is said that Wenger sent chief scout Steve Rowley to watch the recently-capped Freiburg defender in the Bundesliga this weekend.

The Gunners have been on the trail of 6ft 3in 20-year-old for months, but are now stepping up their interest ahead of a summer bid.

Manchester United have also been keeping an eye on the player, but Wenger has strong relations with Freiburg and would have a good chance in the chase.