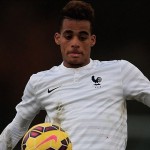 It has been revealed that Arsenal are set to beat Manchester United to the signing of Lens wonderkid Yassin Fortune.

The Daily Mail claims that Arsenal have pipped Manchester United to the signature of Lens forward Fortune.

The 16-year-old has been chased by both clubs over recent months as they charted his progress for Lens and France U16s, notably during the games against Switzerland and England in February.

The deal is understood to be worth a potential £3million to Lens which was considered too much of a gamble by their Old Trafford counterparts.