It has been reported that Arsenal are believed to have their noses in front of Manchester United in the race to sign Schalke midfielder Julian Draxler. 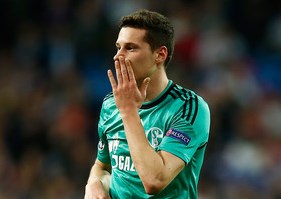 The 20-year old was a target for the Gunners in January but opted to remain in Germany for the rest of the current season.

Reports are suggesting that Arsenal are favourites to land the German international in the summer transfer window ahead of United and German giant Bayern Munich.

However, Draxler’s agent Roger Wittman insists the young gun and teammate Jefferson Farfan – who has also been linked with a summer exit from Schalke – are unlikely to leave Gelsenkirchen anytime soon.

“Why should a player leave the club if the club have just built a top team? I also think it’s good if players stick to what they have signed,” Wittman said.

“It would take an awful lot to happen for one of the two [Draxler or Jefferson Farfan] to leave.

“The players understand that there is currently a lot of peace at the club and a lot of optimism about their future there.”