Reports are out claiming that Arsenal are believed to be preparing a £17.8million bid to lure Real Madrid striker Karim Benzema to the Emirates Stadium. 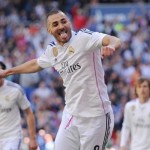 It is understood that Madrid would be willing to sell the French international for such a price.

The Daily Star is reporting that Manchester United and Liverpool are also interested in Benzema, but Arsenal are believed the be the frontrunners for the 27-year-old who scored 27 La Liga goals last season.

However, Benzema’s agent Karim Djaziri recently hosed down speculation linking his client with a move to the Premier League.

He told Spanish publication Marca: “I haven’t met with any club in London. Not with United and not with anyone else. We haven’t held talks with anyone other than Real Madrid.

“What is Karim going to do in Manchester? He’s happy in Madrid. He doesn’t want to leave.

“Benzema would only leave if Real Madrid told him he was surplus to requirements, because he isn’t going to leave of his own accord.
“Karim wants to see out his contract. He wants to retire at Real Madrid.” Bayern Not Interested In Selling Shaqiri To Man Utd, Liverpool