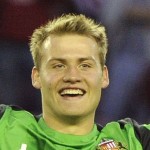 Arsenal will make a formal offer to Sunderland to sign their goalkeeper Simon Mignolet at the end of the season.

Arsène Wenger, the Arsenal manager, has had the player watched repeatedly by his scouts and has made checks about the character of the 25-year-old Belgian.

Sunderland are not keen to sell Mignolet, who was signed by Steve Bruce almost three years ago. He arrived for just £2m from Sint-Truiden in Belgium. Bruce had fought off competition from PSV Eindhoven and FC Twente to sign the player. He was used more than expected in his first season in the North-east, as a result of injury to the then first-choice goalkeeper Craig Gordon, and eventually ousted the Scot and similarly held off competition from the Irish goalkeeper Keiren Westwood the following season.

This has been Mignolet’s standout campaign, keeping 10 clean sheets in a Sunderland side fighting relegation. He won the North-east football writers’ player of the year and only Joe Hart, Pepe Reina and Petr Cech have kept more clean sheets in the top flight this season. He has also made more saves than any other Premier League keeper in the current campaign.

Wenger has struggled to find a commanding goalkeeper since Jens Lehmann initially left in 2008. Manuel Almunia and Fabianski have played more than 200 games for the club without convincing. Szczesny, who spent a season on loan at Brentford in 2009-10, was supposed to be the commanding keeper that Arsenal needed to usher in a new era at the club, but it has not happened for the Pole.