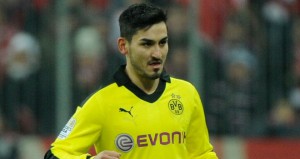 The Mail on Sunday says Gundogan, 22, who has seven Germany caps, is seen as the perfect fit for the holding midfield role Wenger wishes to fill and his staff have scouted more extensively than ever before in the Bundesliga.

But he may be difficult to prise away from Dortmund, with Real Madrid having expressed an interest in signing him in a year’s time.

Wenger is determined to bolster his midfield and his No 1 target is Gundogan, whose holding midfield role was crucial to Borussia Dortmund’s impressive run to the Champions League final.
Gundogan scored their penalty equaliser at Wembley, but could not prevent Bayern Munich’s 2-1 victory.
He would cost £20m but a bid for Bayer Leverkusen’s £17m-rated Bender is also being lined up, in case Arsenal are unable to complete a deal on Gundogan. Any one of the potential fees for Arsenal’s three targets would surpass the £15m record transfer paid for Andrey Arshavin in 2009.