Reports are out claiming that Arsenal have joined the battle for Colombia World Cup star Juan Cuadrado. 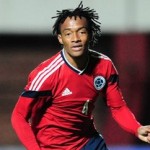 The Colombian international is available from Fiorentina, with Italian sources stating Bayern Munich are offering €40 million for his signing.

Cuadrado’s agent, Alessandro Lucci, met with Bayern officials on Friday to discuss terms and is scheduled for talks this week with Barcelona representatives.

And it’s emerged during discussions, that Lucci has confirmed to both interested clubs that Arsenal have made contact to register their interest.

The Italian agent is now waiting for an Arsenal call to travel to London for talks over a move to the Emirates for Cuadrado. Arsenal Boss Wenger Delighted With The Performance Of Theo Walcott