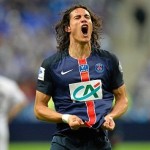 Reports have emerged claiming that Arsenal are lining up a bid for PSG striker Edinson Cavani.

The Mirror claims that Real Madrid striker Karim Benzema is their top target, but Arsene Wenger is thought to be reluctant to shell out the asking price for the Frenchman which is in excess of £35million.

Cavani meanwhile, has been talked up with a move to Manchester United, as Louis van Gaal only has three established strikers at his disposal.

The Uruguayan faces an uncertain future at Paris Saint-Germain boss after the breakdown in his relationship with boss Laurent Blanc.

And Cavani has been eyed up as an alternative to Benzema should a deal fall through.