Reports are out claiming that Arsenal are believed to be close to signing Grzegorz Krychowiak from Sevilla. 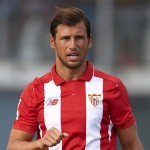 According to the Daily Express, the Gunners are ready to complete a £16million deal for the 25-year-old Poland international who has been linked with a move to North London for much of the summer.

Krychowiak has also been linked with Manchester United and Southampton recently but it appears as though Arsene Wenger will push through a deal for his services this week with some outlets indicating the fee is likely to be closer to the £21m-mark.

The agent of the former Reims defensive midfielder has suggested that Krychowiak is happy in Seville but has not ruled out a possible summer exit.

David Manasseh told fichajes.net:”If I can guarantee that he will continue at Sevilla? In football, in my experience, no one can ever guarantee anything.”