Reports are out claiming that Arsenal are unlikely to offer Brooklyn Beckham a scholarship. 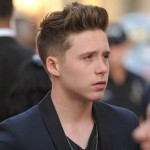 The Daily Mail is of the belief that the 15-year old son of former England, Manchester United, Real Madrid and LA Galaxy midfielder David will not be retained by the Gunners next season.

Beckham Jnr linked up with Arsenal’s U18s recently, suggesting that his imminent departure may be a shock, but sources close to the club have indicated that his step up from the Hale End academy was by default due to a lack of numbers at the time rather than owing to good form.

Beckham, who was hoping to land a two-year scholarship contract, will stay with Arsenal for the remainder of the season before parting ways with the north Londoners.

It is believed that Brooklyn’s younger brothers Cruze and Romeo, who are also enrolled at Hale End, will stay on with the Gunners.