Reports have emerged claiming that Bayer Leverkusen ace Hakan Calhanoglu has emerged on the radar of Barcelona. 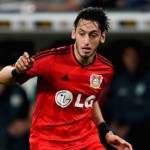 The 21-year old German attacking midfielder is already a target for Arsenal but it is now believed that the Catalan giants have joined the race for his services.

Of the reported interest, Calhanoglu told TRT: “There is no official offer from Barca but I am proud to hear of transfer rumours.

“My agent takes care of everything. I have career goals, but first we want to beat Atletico Madrid in the Champions League.”

Leverkusen meet Atletico in the Round of 16 second leg at the Vicente Calderon on Tuesday night having won the first leg 1-0 at home late last month.