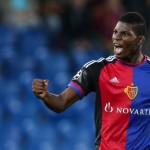 Reports are out claiming that FC Basel striker Breel Embolo is being watched by Barcelona.

The young Swiss has been linked with Arsenal and Tottenham.

However, Sport reported that Barça have been monitoring his evolution over recent months.

There were scouts from the Catalan club present at the Europa League draw between Basel and Fiorentina recently.