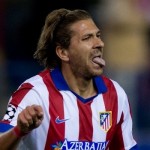 Reports are out claiming that Inter Milan are focusing on a deal next month for Atletico Madrid winger Alessio Cerci.

Inter coach Roberto Mancini is insisting on a new wide player for the January market and Tuttosport says Cerci is his No1 target. Chelsea midfielder Mohamed Salah is also under consideration.

However, Cerci is Mancini’s top target and the Inter coach is understood to have been assured by the former Torino star he wants the deal to happen.

Arsenal and AC Milan have also been linked, with the latter holding the trump card of Fernando Torres.

The on-loan Chelsea striker is wanted by Atleti and Milan are willing to release him from his two-year Chelsea loan – if Cerci is offered in return.