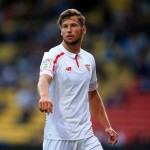 Reports are out claiming that Sevilla midfield powerhouse Grzegorz Krychowiak has COOLED talk of a move to England.

The Poland international star has been linked with the Gunners as a potential replacement for Francis Coquelin, but he does not seem keen on the move, says the Daily Star.

He said: “A future in England? It’s too cold there.”

Krychowiak has been catching the eye with his performances for the Spanish giants and has fast become one of Europe’s most sought-after midfielders. Wenger Delighted For Yaya Sanogo : He Has A Big Future At Arsenal!