It has been reported that Arsenal are prepared to discuss a cash-plus-player swap deal with AC Milan for Mario Balotelli. 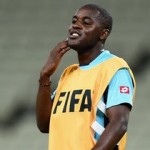 It is said that the Italian giants have slapped a €35 million price-tag on the back of the Azzurri star, well aware that Gunners boss Arsene Wenger is keen.

Wenger is now willing to include Joel Campbell in their offer to drive down the cash component of the deal, says Tuttosport.

The Costa Rica striker is highly admired at Milan and any deal involving the youngster would be welcome at their end of the negotiating table.

Moving to London Colney also wouldn’t be a problem for Balotelli, with the former Manchester City striker’s agent, Mino Raiola, talking up Arsenal and the London lifestyle only yesterday.