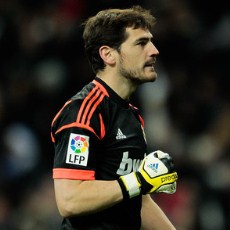 Arsenal are eyeing Real Madrid legend Iker Casillas and will make a bid this summer.

The Daily Star Sunday reports that the Spanish No.1 has been a fixture at the Bernabeu for years but his future is in doubt after spending much of this season injured or dropped and is not favoured by current coach Mourinho.

Casillas himself hinted at a possible move in an interview earlier this week, saying: “I want the fans to remember me as a player who wore the Real shirt with pride.”

Casillas, 31, is under contract until 2015 but he has a frosty ­relationship with Jose Mourinho. He would cost the Gunners £17million.

Arsenal want a big-name star to come in and mentor gaffe-prone Wojciech Szczesny next season – and Casillas fits the bill.