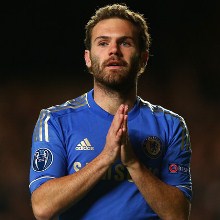 Arsenal are reported to be monitoring the situation of Chelsea midfielder Juan Mata with the Stamford Bridge future of the Spain international under intense speculation.

The Gunners were beaten to the signing of Mata by Chelsea during the summer transfer window of 2011 and, according to the Daily Mail, are hopeful of taking advantage of his uncertain situation.

Mata was rumoured to have been included in Chelsea’s bid for Manchester United striker Wayne Rooney, with the latter initially briefing the media that the Blues had made a part-exchange offer.

Chelsea quickly followed with a statement to reject this assertion, with David Luiz also reported to have been made available in the proposal, and Jose Mourinho has maintained his desire to keep both players.

“I spoke with them during the summer, in my period of holiday and their period of the Confederations Cup, yes,” Mourinho told reporters.

“But when they finished the Confederations Cup I just wished them luck and told them that I will see them on the 28th.

“I am not going to contact them based on news that are not true, and that they know that is not true because I have told them they are very important for me.

“How can I change that two days later because of a news [story]? So no, no contact with them.”

Despite the insistence of Mourinho, however, Arsenal are reportedly being kept updated on Mata and are prepared to make a formal approach should the 25-year-old be made available for transfer.

Chelsea insist Mata is not for sale, but Arsenal are keeping their eye on his situation and have the reserves available to Arsene Wenger if he were to decide to launch a bid for the Spain international.