Reports are out claiming that Arsenal boss Arsene Wenger is ready to bomb out Olivier Giroud this summer. 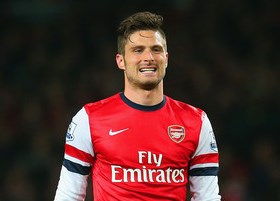 The Daily Mail reported that Giroud started on the bench for Arsenal in their FA Cup semi-final win over Wigan amid growing concerns about his future at the club.

With Arsenal on the lookout for at least two new strikers this summer, Giroud is likely to fall further down the Arsenal pecking order.

When Giroud signed for Arsenal in June 2012, it was agreed that he would hold discussions with Wenger about his future at the end of this season.

Normally discussions would have centred on the possibility of a new contract but the affair allegations have led Giroud to believe it could be in the best interests of his family to start afresh away from London.

Kim Kallstrom Back At Arsenal To Continue Recovery