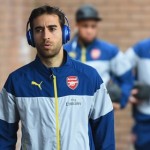 Reports are out claiming that Arsenal will hold talks with Mathieu Flamini at the end of the season.

The 31-year old French midfielder is out of contract this summer but the club is yet to decide on his future according to the Daily Mirror.

Flamini returned to north London from AC Milan in the summer of 2013 and made 27 Premier League appearances in his first season back in England.

This term, Flamini has started 15 times in England’s top flight and it is suggested that he is surplus to requirements and could be let go at the culmination of the current campaign.