It has been revealed that Arsenal are reportedly preparing to swoop for Manchester City winger Jesus Navas. 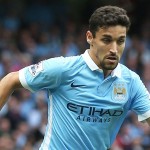 Tuttomercatoweb is reporting the Gunnershave identified Navas as a player who can bolster their stock in the attacking third of the pitch after star striker Alexis Sanchez suffered hamstring injury on the weekend.

It is understood Gunners boss Arsene Wenger has ongoing concerns about Sanchez’s long-term fitness and believes it is necessary to bring in reinforcements during the January transfer window.

Navas, who joined City from Sevilla for £15million in the summer of 2013, has featured in 13 Premier League games for City so far this season. Arsene Wenger : Andrey Arshavin Needed To Get His Confidence Back