Reports are out claiming that Arsenal are reportedly showing interest in Aleksandr Kokorin. 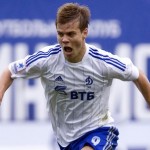 The Gunners were linked with the Dynamo Moscow striker last week but the interest quickly fell by the wayside.

However, the Daily Mail reports that perhaps Arsenal are keen again with talks regarding an initial loan with the view to a permanent deal having taken place between the two clubs.