It has been reported that Arsenal have joined the battle for Lazio midfielder Lucas Biglia. 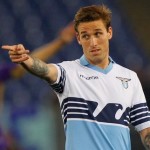 Italian intermediaries revealed this week contact with Juventus and Real Madrid for the Argentina midfielder.

However, Gazzetta dello Sport says the field is becoming more crowded by the day with Arsenal and PSG also keen.

Agent Alessandro Mallia revealed yesterday: “Juventus want to sign Lucas Biglia, who may end up at Real Madrid. They already tried for him last year, but in that case, Biglia decided to stay with Lazio.”

Lazio chiefs rate Biglia among the best box-to-box midfielders in the game and are insisting he won’t leave for less than €50 million.