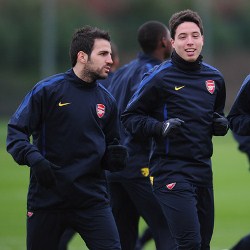 It has been revealed that Arsene Wenger may be forced to sell Cesc Fabregas to fund the new contract of Samir Nasri.

The Sunday Mirror has reported that Arsenal have rejected a £27m bid for ­the club captain from Barcelona but the Champions League winners will make an improved offer this week. If that reaches £30m-plus, then ­Arsenal will accept.

That will leave Wenger with the ­necessary cash to offer French ­international Nasri a lucrative new ­contract.

The pair talked last week, but no decision was made. Nasri has a year left on his current agreement.

However the money from the sale of Fabregas, added to the savings on the midfield star’s £90,000-a-week wages, will give Wenger much more room for manoeuvre.