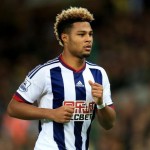 It has been reported that Arsenal boss Arsene Wenger says Serge Gnabry is returning from his loan from West Brom.

“I am tempted to give him some competition because he has not played at West Brom. I am tempted to let him go somewhere to do with him what I did with Coquelin, somewhere for a month or two.” Arsenal, Liverpool To Do Battle For Roma’s Juan Manuel Iturbe