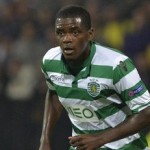 Reports are out claiming that Arsenal are preparing a bid for Sporting Lisbon midfielder William Carvalho.

The Mail on Sunday reported that Arsenal are preparing to go back to Sporting with a £20million offer for Portugal holding midfielder Carvalho.

Talks between the two clubs broke down in the autumn after Carvalho was valued at £30m by his Portuguese team.

But with Arsene Wenger taking Arsenal through to the Champions League knockout stages, where they face Monaco, the importance of solving their well-documented defensive problems have increased. Carvalho, 22, is one of the very few top international-class players who will probably be available in January.