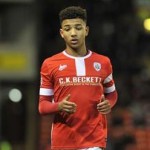 Interesting transfer news are out claiming that Barnsley defender Mason Holgate is being watched by Arsenal and Tottenham.

The People reported that Arsenal and Tottenham are among a number of top-flight clubs sending scouts to watch Holgate.

The second-year scholar joined the Oakwell Academy as a nine-year-old, where he became a regular in the Reds’ youth teams.

Upon signing his first pro deal, Barnsley Academy manager, Ronnie Branson said: “Mason is a bright and intelligent player. He’s a good centre-half and we have high hopes for him to progress. We’ve had interest from other Clubs for Mason.”