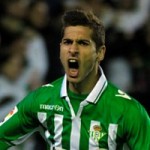 Reports are out claiming that Arsenal and Tottenham are chasing Real Betis winger Alvaro Vadillo.

The Daily Mail reported that the 18 year old has been scouted by many of Europe’s top teams but it appears Spurs and the Gunners are now in a head-to-head battle to secure his services.

The Spanish U20 international winger has drawn comparisons with Real Madrid superstar Cristiano Ronaldo due to his poise on the ball, fondness for a trick, and dribbling ability on the left wing.

He possesses a similar build to that of the young Ronaldo and the early indications are his decision-making is more advanced than the Portuguese’s was at the same age.

Chelsea Midfielder Marko Marin Eager To Prove Himself At Sevilla