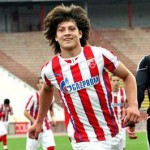 Reports are out claiming that Arsenal and Tottenham are chasing Red Star Belgrade midfielder Luka Jovic.

O Jogo reported that Benfica have joined Arsenal and Tottenham in the race for the teen.

The Serb is just 17-years-old but already has six goals this season and Europe’s top clubs are beginning to take notice.

Benfica are willing to offer him a substantial contract and guarantees of first team football.