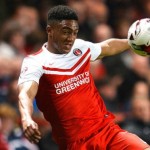 Reports are out claiming that Bundesliga interest is arriving for Charlton Athletic defender Joe Gomez.

Tottenham and Arsenal, where manager Arsene Wenger is a big fan, are planning summer offers for Gomez.

However, they could now face competition from Germany.

Sky Deutschland claims that Borussia Dortmund, VfL Wolfsburg and Hamburg SV are all chasing Gomez for next season.

Scouts from all three clubs have tracked Gomez in England U19 action this season.