Interesting transfer news are out claiming that Arsenal and Tottenham are chasing Chelsea midfielder Juan Mata. 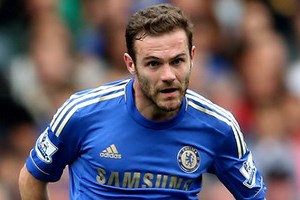 It is said that Gunners boss Arsene Wenger confirmed his interest in Mata after last night’s victory over Fenerbahce.

The Daily Mail claims that despite enjoying two fruitful seasons with the Stamford Bridge club, Mata faces playing a bit-part role this season following the £30m arrival of Willian.

The Brazilian had already completed a medical at White Hart Lane but opted to join their London rivals, leaving relations between the clubs strained.

But that hasn’t stopped Spurs considering a bid, although Chelsea have denied that an approach has been received.

Atletico Madrid were the first club to register their interest in the 25-year-old and are keen to take the Spain international on loan having lost Radamel Falcao, their talisman from last season, to Monaco over the summer for £50m..