It has been reported that Olympique Lyon striker Alexandre Lacazette remains a target for Premier League clubs. 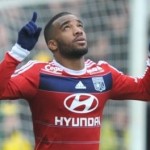 Lacazette was close to joining Liverpool over the summer before committing to OL for the new season.

However, French sources say his superb form has led to fresh interest from Arsenal and Tottenham this term.

Lacazette has struck 10 goals so far this campaign, having penned new terms to 2018 in August.

“There was lots of speculation with regards to a possible transfer, but I wanted to progress in the club where I was made,” he said upon penning new terms.

“To have responsibility interested me. I had no reasons to leave.”