Reports are out claiming that Toby Alderweireld is determined to quit Atletico Madrid this month. 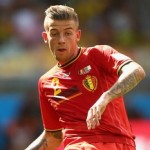 According to reports from AS, with Joao Miranda now staying put, the Belgium international defender will carry through with his decision to leave Atletico before the deadline falls.

The 25 year old has been linked with a move to the Premier League, where Arsenal and Tottenham are among suitors.

For their part, Atletico will not sell below market value, which is working against Alderweireld’s plans.

A loan arrangement has been mentioned, but the defender is unlikely to find a move to his liking on such terms.