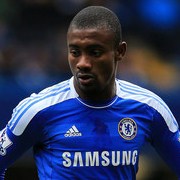 Interesting news are out and it has been revealed that Chelsea are battling to keep hold of Salomon Kalou.

The Sunday Sun reported that the Ivory Coast international has opened talks on an improved deal with the Blues, but he is also on the radar of Arsenal and Tottenham.

A source close to the player declared: “The main sticking point in the talks with Chelsea is about playing time. It’s not necessarily about money.”