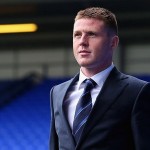 It has been reported that Everton face losing midfielder James McCarthy this summer.

The Daily Mail claims that Everton face losing influential midfielder McCarthy this summer after failing to fulfil promises over an improved contract.

The Republic of Ireland international signed from Wigan for £13m in 2013 and it is understood assurances were made that his terms would rise according to performances.

McCarthy has gone on to become an integral part of Roberto Martinez’s side and statistically, in terms of pass completion and tackles made, has been one of their best players over the past two seasons.

McCarthy had interest from Arsenal and Tottenham in January and the 24-year-old won’t be short of admirers.