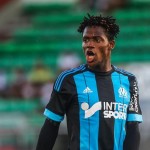 Reports are out claiming that Olympique Marseille striker Michy Batshuayi admits he has Premier League ambitions.

The young Belgium international has been linked with Arsenal and Tottenham this season.

He told Be in Sport: “It is true that I have had the opportunity but I have never thought of leaving.

“England attracts everyone. Even their advertisements are better than all the others. There are funny scores out there, many surprises. And beautiful goals.

“After that, physically, it’s hard, but that’s how you become stronger.”