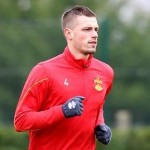 Reports are out claiming that Southampton midfielder Morgan Schneiderlin admits he could be on the move this summer.

According to L’Equipe, the 25-year-old is ready to quit if Ronald Koeman’s side can’t break into the top four.

He said: “I don’t want to be in front of the TV on Tuesday and Wednesday.

“But at the end of the season, Southampton could qualify for the Champions League and I could also stay. Who knows…”

Arsenal and Tottenham have been linked with the Frenchman.