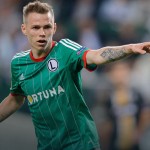 Arsenal, Tottenham, Southampton and Aston Villa are also being linked with Duda this summer.

“We’d be happy if he remained in Warsaw, but the key is what the player will want to do and he wants to join Inter.

“He has already turned down every other proposal, albeit thanking them for their interest.”