Reports are out claiming that Olympique Lyon defender Samuel Umtiti admits he has ambitions of moving to England. 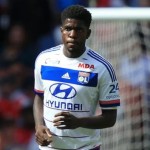 Umtiti, regarded among the best defenders in Ligue 1, says moving abroad is now on his agenda.

He told RMC: “I am very ambitious, going abroad would be a dream, even if before there are still many things to learn with Lyon.

“England? Everyone admires the league, as well as the Spanish one. I have no real preference.”

Manchester City, Arsenal, Tottenham, Southampton and Everton have all scouted Umtiti this year.

Sunderland Not Interested In Selling Stephane Sessegnon To Arsenal, PSG