It has been reported that a European scramble is on for Shakhtar Donetsk attacker Douglas Costa. 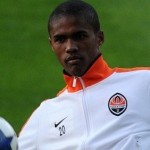 The Daily Mail reported that Arsenal and Tottenham are fighting for the loan signing of Douglas Costa, with AS Roma and AC Milan also keen.

Douglas Costa is one of six Shakhtar players refusing to return to Ukraine as conflict rages around the club’s home city – and the two North London rivals are offering an exit route.

But the 23-year-old’s current club are reluctant to sanction a move for one of their top stars, with owner Rinat Akhmetov already stating that: “There won’t be a clearance sale.” REVEALED : Arsenal Target To Join Real Madrid On One Condition