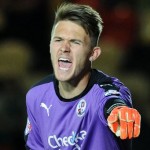 Reports have emerged claiming that North London rivals Arsenal and Tottenham are set to battle it out for Newcastle United goalkeeper Freddie Woodman.

ClubCall is reporting the Gunners and Spurs are both keeping tabs on Woodman’s circumstances at the Magpies, while Liverpool are also believed to be interested.

The England U-19 international’s current deal expires at the end of the season and he is yet to begin discussion with Newcastle about extending his stay at St James’ Park.

Woodman spent the first half of the 2015/16 campaign on loan at League Two club Crawley Town and is yet to make his first team debut for the Magpies.