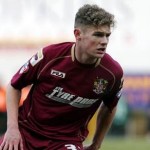 Reports are out claiming that Arsenal and Tottenham are eyeing Stevenage Borough striker Ben Kennedy.

The People reported that Gunners chief scout Brian McDermott has been to watch Kennedy who, though only 18, already has a host of Premier League clubs, including Manchester City, monitoring him.

Kennedy only signed his first professional deal with Stevenage in February, a month after making his debut against Oxford.

On signing, he said: “I just have to continue working hard, doing what I’m doing and hopefully I can push on.”

In his four appearances for the League Two side, Kennedy has found the net on three occasions.