It has been reported that Arsenal are tracking Barcelona whizkid Sergi Samper. 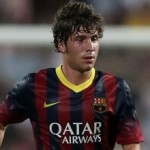 The Mirror reported that Arsenal boss Arsene Wenger was after the now 19-year-old midfielder three years ago, when he signed Hector Bellerin and Jon Toral from the Spanish giants.

However the 19 year old decided to stay put and he will still take some persuading, as his priority is to make Barca’s first team squad.

Samper has impressed for Barcelona B and now wants to push on after new manager Luis Enrique told him he will get a chance with the seniors this season.

That will be pivotal as to whether Arsenal can lure him to the Emirates with his contract – which expires in 2017 – including a £9.5m buy-out clause.