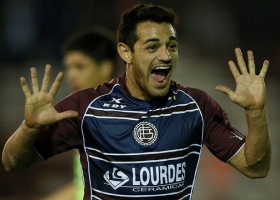 The 26 year-old has revived his career this season after overcoming long-term injury and his form is expected to see him return to Europe.

Acosta, tied to Lanus until 2016, had a previous spell in Spain with Sevilla.

The Argentine forward has rediscovered his scoring touch since joining Lanus last season.