Reports are out claiming that Arsenal are tracking Ipswich Town fullback Tyrone Mings. 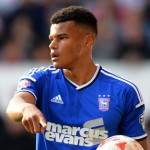 The Daily Star reported that the 21-year-old has turned in several impressive performances this season, and has caught the eye of several Premier League managers.

One of those managers who has been impressed with the full-back’s performances is Gunners boss Arsene Wenger.

According to reports, the Frenchman is currently monitoring the Ipswich ace – and will make a move for him in the January transfer window.