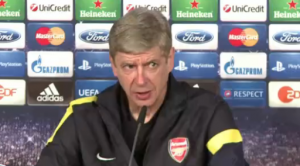 Arsenal face a Herculean task as they look to claim their place in the quarter-finals of the Champions League.

Arsene Wenger’s side were out-gunned in the first leg of their round of 16 tie with German giants Bayern Munich, soundly beaten 3-1 at the Emirates Stadium.

Now they face a Bayern side that have only lost only nine times in 82 Champions League matches at home.

But Arsene Wenger is insistent, that his side aren’t out of it yet.