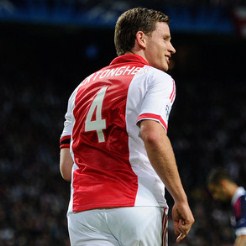 It has been revealed that Ajax defender Jan Vertonghen remains on the radar of Arsenal boss Arsene Wenger.

The Belgium international was surprised to see the summer market close without getting a move to England, where he is also interesting Manchester City and Liverpool.

Vertonghen is close to Arsenal defender Thomas Vermaelen and is viewed by manager Arsene Wenger as a cheaper alternative to Bolton Wanderers’ Gary Cahill.