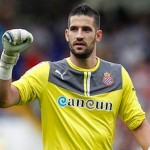 The 27-year-old Spaniard was on their radar last summer.